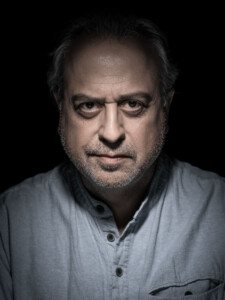 SOLAR BONES
by Mike McCormack
in an adaptation by Michael West

Marcus Conway has come home to his kitchen in Louisburgh Co. Mayo. Everything seems normal, yet he is haunted by the feeling that nothing is quite right. Poring obsessively over the details of his relationships, his world and his work as an engineer brings him closer to an understanding of how the things and people he loves have come together, and how they have and must inevitably come apart.

Winner of the Impac Dublin Literary Award 2018, Solar Bones is Mike McCormack’s multi-award-winning elegy to the merits of an ordinary life, spoken from an intermediate state between memory and nothingness.

Originally developed by Something Different in association with Mermaid Arts Centre

The simplicity. The isolation. One man trying to make sense of where and what he was, using all he knows, the story of his life. All he has is talk. I loved the language and the man. The lack of distraction. The searing connection I felt to him and the pain I felt for him.

I think the simple loneliness of a man haunting his life in absolute isolation will ring with people these days.

The magic of language, the empathy and connection with Marcus as we realise we are witnessing not someone with dementia or someone dreaming but a lost soul in the void desperately trying to keep going.

When I first read Solar Bones I thought it was one of the finest Irish novels published in recent years. Having worked on it for this adaptation I’m convinced it’s one of the finest novels of our time. As a piece of writing it is astonishingly achieved and sustained, and has a closing sequence to match anything you’ll ever read.

As well as being a love letter to the idea of family and community, I love that it’s also a poem to the act of writing and imagining, a pledge to hold faith with the kitchen table and the pages that emerge there. And while we always say the work is its own reward, the book is an inspiring story in itself of excellence finding due recognition — published and edited to the highest standard by a small, young independent company, Tramp Press, and going on to win the Goldsmiths and the International Dublin Literary Award.

We are extremely grateful to Mike McCormack for letting us bring his beautiful work to you. We hope our stage version will introduce it to new audiences as well as those who already know and love it — and if it encourages anyone to read the book for themselves, I envy the pleasure that lies ahead of you.

What a time to be making this grave, beautiful, essential work – and what a team to bring it to the stage. As ever, our partnership with Kilkenny Arts Festival is taking us, and the whole of Irish theatre into new territory; as ever it is a joy.

Wonderfully original, distinctly contemporary . . . Where modernism took a world that appeared to be whole and showed it to be broken, Solar Bones takes a world that can’t stop talking about how broken it is, and suggests it might possibly be wholeThe New York Times Book Review on Solar Bones

PLEASE NOTE ONCE YOU SELECT ‘BOOK NOW’ YOU WILL BE REDIRECTED TO KILKENNYARTS.IE TO MAKE YOUR BOOKING.