A new, laugh-out-loud funny yet poignant one woman show starring Pauline O’Driscoll (Smalltown, The Young Offenders) in which Mam hilariously reminisces about her life as a woman, a daughter and a mother. An entertaining, thought-provoking, funny and moving exploration of the universal themes of motherhood, sexuality, grief, infidelity, ageing, equality, love, lust and loneliness.

Finally touring in Ireland for the first time having garnered rave reviews and been nominated BEST NEW PLAY at its World Premiere at Brighton Fringe Festival in 2019.

A contemporary reimagining of Shakespeare’s most famous soliloquy –  but from a Mam’s point of view!

Albeit a female centric piece about what it means to be a woman and a mother, Seven Ages of MAM will appeal to men and women alike. As Pauline O’Driscoll says “Anyone who is a mum, knows a mum or ever had a mum will relate to this play …. yes, in other words everyone! One male audience member actually told me he laughed and cried and next day took his mum to lunch. I loved hearing that. On behalf of mother’s all over the world, it made my day” .

“MUST SEE SHOW wondrously inventive exploration of motherhood, grief, lust, heartbreak and joy… hilariously detailed….consummately acted…. wholly believable… O’Driscoll can call down the angels in a light high tessitura – a whisper away from silence, and she can on occasion roar like a banshee….What O’Driscoll is master of is pause and sudden tangent. The surprise monologue, the hilariously detailed aside, the squirm of embarrassment, and the language of love and forgiveness and letting go. What O’Driscoll brings even more than the humour is the sudden abiding grief. And what she gets more than grief is life-affirming humour, and what she gets most is utter exhaustion…. No, she’s of a piece……. the most original riff on the Seven Ages I’ve seen, and so beautifully subsumed you might not notice it at all … See it.”– Simon Jenner, FringeReview

5 STAR HIT with audiences:-  “Belly Laughed”….“Staggeringly Brilliant”…. “Hugely Entertaining”…..“Highly Recommended”…. “a one woman show that feels like a stage full” ….”Beautifully crafted play, exquisitely performed” … ” Genuinely laughed and cried”…. … “Pauline holds her audience in the palm of her hand. She is a natural story teller and we just want more”… “Everyone Can Relate”….

The creative team behind Seven Ages of MAM is made up of Pauline O’Driscoll (performer, producer & co -writer), Mark Evans (co-writer) and Tom Kibbe (director) 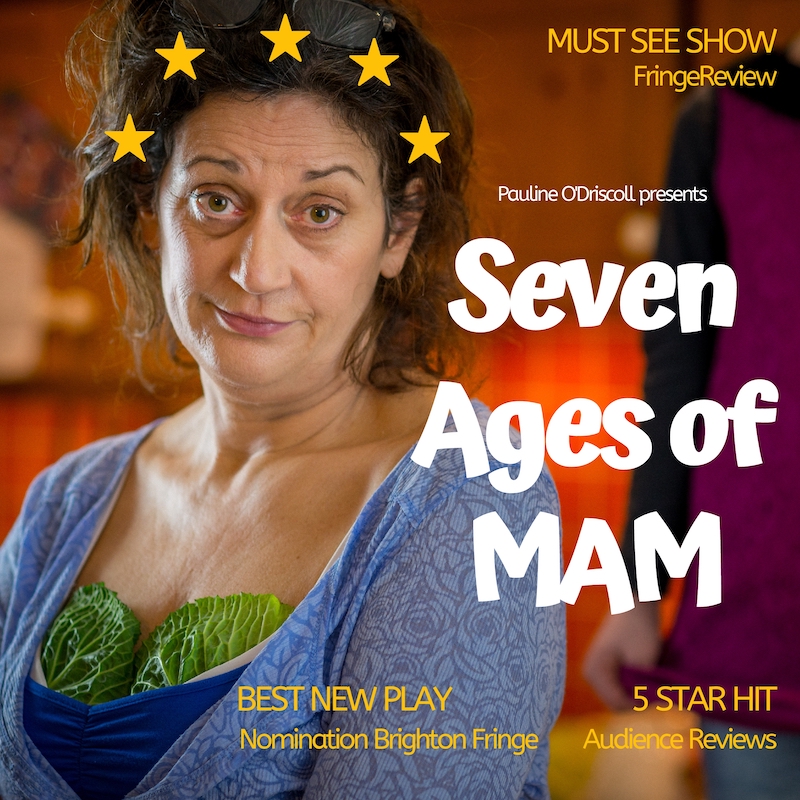