Áine Gallagher, otherwise known as the “queen of offbeat”, is a professional stand up comedian, storyteller, writer and comedy training facilitator. She began performing comedy in 2011, in this time she has become a stand out Irish act. With her novel use of bilingual comedy, she is a leading advocate for Irish language learning and she is proud to be Ireland’s only unqualified, guerrilla Irish teacher. She is passionate about using authentic storytelling to benefit the community at large and works with many organisations to facilitate others to develop their own storytelling skills and find their own voice. Organisations she works with include; Berlin Stand Up School, Bright Club Ireland and numerous third level education bodies with a commitment to Public Engagement.

He was born in Dublin at the end of 1975. He wanted to become a professional cyclist, then a professional jazz musician, but an almost complete lack of talent in these areas meant that he became a professional telemarketer, ringing up strangers to ask them to rate things out of ten.

Then in 1998 he did his first open spot at the now defunct Norseman Comedy Club in Dublin’s unfortunate Temple Bar district. In 1999 he travelled to the Edinburgh Festival Fringe for the first time and was lucky enough to win the Channel 4 So You Think You’re Funny? new act competition and with it a huge cardboard cheque with £1500 written on it. Somebody told him it was legal tender, so he took it into a bank which made the cashier almost weep with laughter. Seriously, she got the other people from round the back to come out and laugh at me. That’s the main thing he remembers about that.

In 2000 he wrote a book for children, Ronan Long Gets it Wrong that Mammoth Storybooks in London published. He performed his first full show The Story of the Boy Who Saved Comedy at the Dublin and Edinburgh Fringes where it received a nomination for Perrier Best Newcomer. It was a long winded narrative about a boy searching to find the jokes to put in his father’s Christmas crackers that should probably have been another children’s book rather than a show for grown ups. Some nights it really worked and they were among the most fun nights he has had in comedy. Other nights it tanked. Absolutely tanked. Once, during the Edinburgh run the entire audience of five people, all of whom had won their tickets through a radio giveaway, walked out.

He spent 2001 contemplating whether he really wanted to be a stand up comedian and cycling in France. He wrote some cartoons for German children’s television and a book that is still on his computer. He did a university stand up tour with Noel Fielding where, one night, the audience hated them so much, a man shouted, “STOP CONFUSING ME.” All in all, a tricky time.

But then in 2002 he went to Edinburgh with a new show “small things”, met comedians such as John Oliver, Bret McKenzie, Taika Cohen, Andy Zaltzman, Josie Long, Jemaine Clement and Daniel Kitson each doing wonderful and unique things, and decided that he definitely did want to be a stand up comedian.

At the end of 2002 he performed Saddled with his friend Bryan Quinn at Project Arts Centre in Dublin. It is the first theatrical show anywhere ever to feature live repair of audience member’s bicycles.

03/04 were spent travelling around to festivals in Melbourne, Montreal, New York, Kilkenny and Edinburgh. Gerry Mallon gave him his first headline spot at the Comedy Club in Galway and he supported musical acts such as David Kitt and some jazz artists. He wrote a radio series The Bees of Manulla with his brother Mark for Irish radio which ended up being horribly recorded and sounding terrible. He wrote a new stand up comedy show David O’Doherty Creates Something New Under the Sun which was based on a short story he had written about a lobster called Shelly. Recently animator Johnny Kelly has made a much better version of it as an animated short film. You’ll find it here: http://www.flasher.com/view_video.php?profile_id=447

In 2005 he supported Tommy Tiernan and Rich Hall on tours of Ireland and the UK. He learned a lot from them.

His 2006 show David O’Doherty is my name was nominated for the if.comedy Award at The Edinburgh Fringe and was performed in Dublin, Melbourne and New Zealand. He recorded his first live album in front of 35 people in his flat. That autumn he toured America with Demetri Martin.

2007 saw his first major Irish tour and a series of documentaries, The Modest Adventures of David O’Doherty on Irish television. As a part of the series he released a single, Orange which reached number 30 in the Irish charts. This was regarded as a failure as the aim had been to get it to 27. The series was directed by John Carney, who was just finishing the film Once which would go on to win the Oscar for best song. There have been several mix-ups where people thought Orange had won an Oscar. Orange has not yet won an Oscar.

In 2008 his new stand up show Let’s Comedy was performed in Australia, New Zealand, Canada and at the Edinburgh Fringe, where it received the if.com Award for Best Show. That Autumn he toured across Canada with the Just For Laughs Roadshow, at one stage getting so drunk he made out with an actual frozen fish. There is a picture of this on the internet. He also performed his first play for kids I CAN’T SLEEP with Maeve Higgins.

2009 saw the launch of the book 100 Facts About Pandas, co-written with his friends Mike Ahern and Claudia O’Doherty. There’s a great website for it here:www.100factsaboutpandas.com . It came out in America in 2010 and was followed in 2011 by 100 Facts About Sharks. That has a good website too: www.100factsaboutsharks.com . He also appeared in a feature film A Film With Me in It with his brother Mark and Dylan Moran and did lots of comedy gigs, including his first major UK tour. He recorded a new album Let’s David O’Doherty in Dublin.

Since that time he has been appearing occasionally on UK television on shows such as QI, Have I Got News For You, 8 Out of 10 Cats and Would I Lie to You. He is least famous person ever to have hosted an episode of Nevermind the Buzzcocks. He is the occasional third wheel on the 2 Episodes of Mash radio show on BBC Radio 4. He

In 2011/2012 he performed his first character show Rory Sheridan’s Tales of the Antarctica in Edinburgh, Dublin and Melbourne. In June 2012 he became the first Irish comedian to have their own Comedy Central Presents show on US television.

He has written a new stand up comedy show David O’Doherty Will Try to Fix Everything that he will tour into 2014. He is writing a new children’s book and has got back into cycling.

Julie Jay is a comic who has taken the comedy world by storm in recent months and already has many impressive accolades under her belt, including winning the Forbidden Fruit Comedy Search 2017 and performing at all major festivals (Body and Soul, Alltogether Now, Electric Picnic, Vodafone). She has also supported the biggest names in comedy, including Neil Delamere, Ardal O’Hanlon, Alison Spittle, has been resident support act for Tommy Tiernan on his Paddy Crazy Horse Tour and most recently has MCed the 2019 series of the Tommy Tiernan Show.

Her new show Julie Really Love Me explores her quest for validation, being childless in the state of Gilead, classroom antics, and guards. Yes, lots and lots of guards.

One of the most exciting new voices on the Irish comedy scene, her on-stage warmth accompanied by a sizeable side dish of distinctly Irish self-deprecation. Wry wit, neurotic ponderings and clever joke-writing make her an act not to be missed.

PLEASE NOTE ONCE YOU SELECT ‘BOOK NOW’ YOU WILL BE REDIRECTED TO THECATLAUGHS.COM TO COMPLETE YOUR BOOKING. 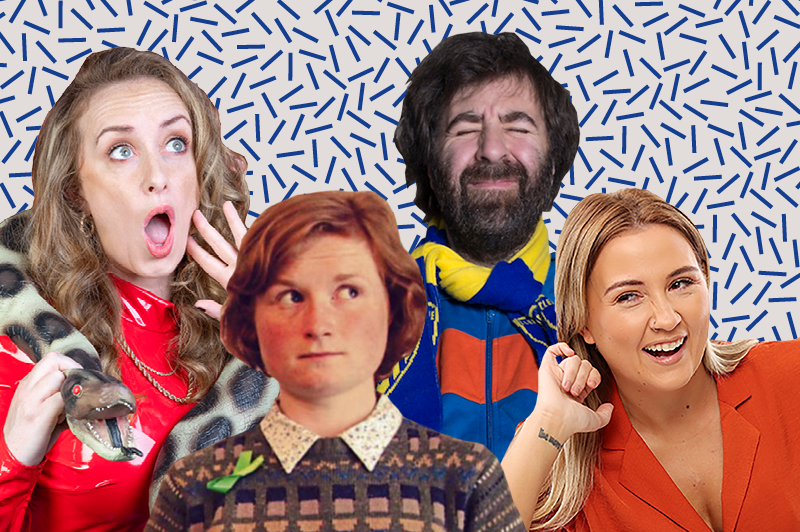