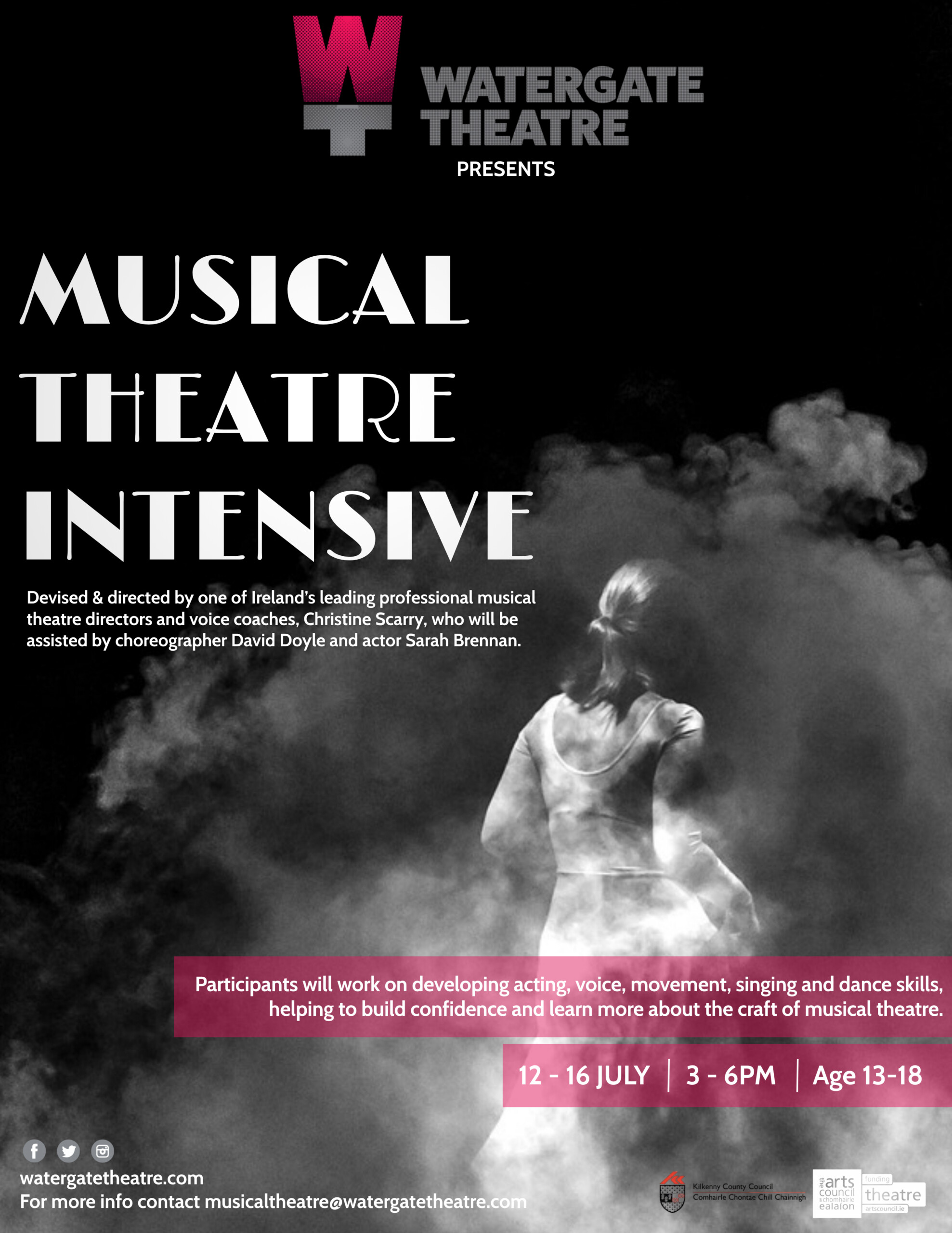 We are excited to announce Musical Theatre Intensive!

During the week participants will work with the core members of a theatre production team to develop acting, voice, movement, singing and dance skills. Through group and individual workshops of popular Broadway and West End shows, participants will develop their musical theatre skills by working on solo pieces, duets or trios and ensemble numbers, helping to build confidence and learn more about the craft of musical theatre.

MTI will take place on site at the Watergate Theatre so participants will also have the added excitement of working in a professional theatre environment for the duration of MTI.

The Musical Theatre Intensive Course will be devised and directed by one of Ireland’s leading professional musical theatre directors and voice coaches, Christine Scarry, and will be assisted throughout the week by choreographer David Doyle and actor Sarah Brennan.

A graduate of the Conservatory of Music & Drama and the Royal Irish Academy of Music, Christine trained in piano and voice, holds a first-class Masters in Directing from Dublin City University, and is an accredited coach with the global network, Vocology in Practice.

With over thirty years’ experience in professional theatre – as a performer and director – Christine has produced and directed productions at all the major Irish venues, including the Olympia Theatre, Cork Opera House, National Opera House, Gaiety Theatre and National Concert Hall, and in 2018 directed a new musical at New York’s Symphony Space, Broadway, following a short US tour.

She was an original faculty member of the first ever musical theatre degree course in Ireland, where she lectured in voice, acting and music theatre history, and continues to be active as a guest lecturer and masterclass facilitator.  In her private vocal practice, she has a proven track record in contributing to the success of actors and singers: until the pandemic struck, her clients were playing leading roles on Broadway, the West End, and major Irish venues including The Abbey and The Gate Theatre.  Christine is Artistic Director of Red Alchemy Theatre Company and Voice Studio, Musical Director of the female vocal group, Alchemy, and Owner of The Voice Industry.

Places will be offered on a first come, first served basis and are currently limited to ensure we can observe social distancing protocols.

To book your place you can pay a non-refundable deposit of €50 per child.

Once we have received your deposit, we will be in touch to confirm your place in MTI